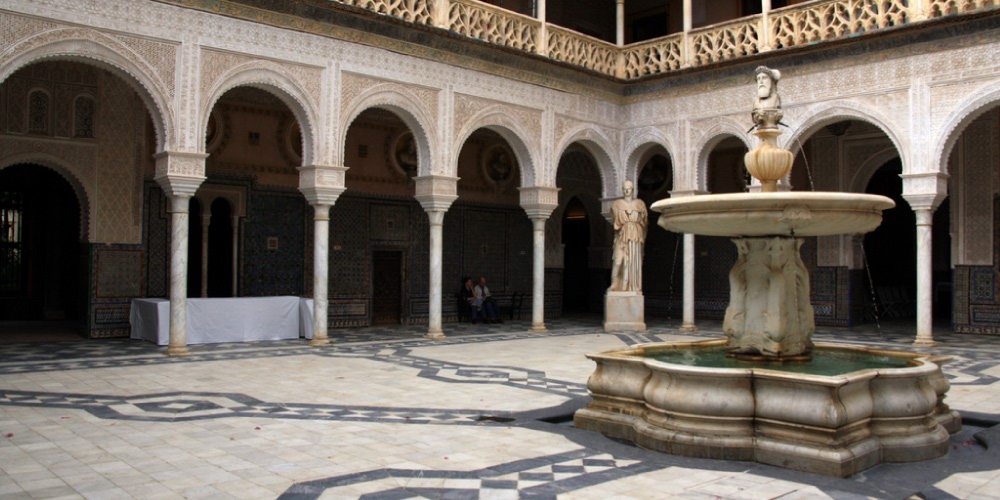 Pilate's House is an Andalusian palace in Seville, Spain, which serves as the permanent residence of the Dukes of Medinaceli. The building is a mixture of Renaissance Italian and Mudéjar Spanish styles. It is considered the prototype of the Andalusian palace. 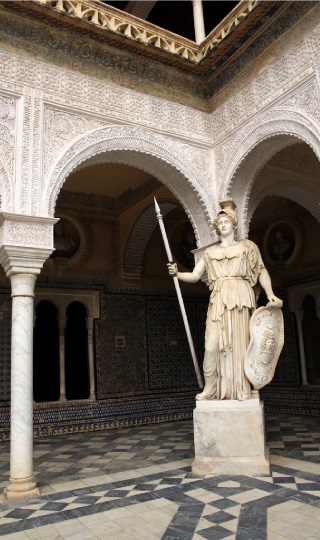 The construction of this palace, which is adorned with precious azulejos tiles and well-kept gardens, was begun by Pedro Enríquez de Quiñones (Adelantado Mayor of Andalucía) and his wife Catalina de Rivera, founder of the Casa de Alcalá, and completed by Pedro's son Fadrique Enríquez de Rivera (first Marquis of Tarifa), whose pilgrimage to Jerusalem in 1519 led to the building's present name of "Pilate's House".

On 20 October 1520, Don Fadrique returned from a trip through Europe and the Holy Land. During Lent in 1521, he inaugurated the observance in Seville of the Holy Via Crucis (Holy Way of the Cross). The route began in the Chapel of the Flagellations of his palace and ended at a pillar located not far from the Templete, or Cruz del Campo (The Cross of the Field,) located outside the city walls. This route ran the same distance of 1321 paces supposed to have separated the praetorium of Pontius Pilate from Calvary. The Marquis's palace, the Palacio de San Andrés, was then still partly under construction; it later became known as the Casa de Pilatos through its association with the Vía Crucis, and was much altered over the next few centuries. Popular imagination has since mistakenly identified the palace as a copy of the house of Pilate; thus the rooms have been named along the theme of the Passion of Christ: "Hall of the Praetorian", "Chapel of the Flagellations", etc. It was declared a National Monument in 1931. The oldest documentation of the name Casa de Pilatos is from 1754.

The palace is accessed through a Renaissance style marble gate, designed by the Genoese Antonio Maria Aprile in 1529, and surmounted by a Gothic crest possibly brought from the palace that developers were building in Bornos. The gate leads to a typical Andalusian courtyard where a fountain surrounded by twenty-four busts of Spanish kings, Roman emperors and other relevant characters collected from the ruins of Italica are distributed along the lower galleries of the courtyard. The courtyard, in turn, leads to two gardens with plateresque adornements.

A staircase to the top floor is decorated with azulejos tiling and a ceiling of Mudéjar honeycomb, made by Cristobal Sanchez. The rooms on this floor include major paintings dating from the sixteenth to the nineteenth centuries, including the Pietà by Sebastiano del Piombo.

In the room to the left wing of the Tower the ceiling displays frescoes painted by Francisco Pacheco between 1603 and 1604 that enhance the apotheosis of Hercules, and in the room that follows the Tower is a tiny series of works by Francisco Goya of a bullfight, then a still life by Giuseppe Recco in the dining room and a table representing Mary Magdalene painted in the sixteenth century; in the library are three works by painter Luca Giordano. As with most palaces of the period, the Casa de Pilatos also has a chapel, designed in a fusion of the Gothic and Mudéjar styles, with antique decor and numerous manuscripts. The Casa de Pilatos is considered one of the finest examples of Andalusian architecture of sixteenth century Seville. The house is open to the public year round.

Palace of the Countess of Lebrija 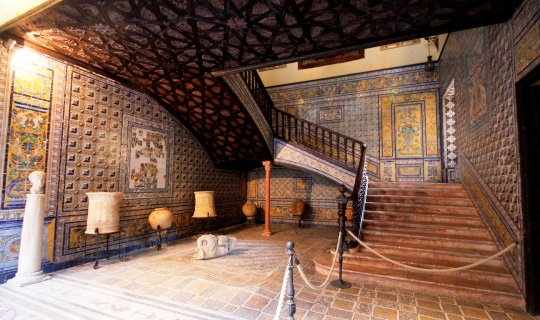 The Lebrija Palace or el Palacio de la Condesa de Lebrija can be found in one of Seville city centre’s busiest streets, Calle Cuna, parallel to the Calle Sierpes. Dating from the 16th century, it is considered one of the best residences in Seville. The palace is characterised by its collection of Roman mosaics, which paved almost the entire ground floor and lead the palace to be considered the ‘best paved house-palace in Europe’. There is also a great collection of well paraphets, amphoras, columns and sculptures of huge artist value.[citation needed] Its walls are a palette of architectural styles with elements such as Arabic-style arches, Plateresque decoration, tiles retrieved from ruined convent, a coffered ceiling from a 16th palace and a renaissance frieze, while its façade and layout remain true to typical Andalusian style.

Construction of the palace as a noble house began in the 15th Century and its façade in the 16th Century in typical Sevillian style. The palace then went on to be remodelled and extended between the 18th and 20th Centuries. When built it belonged to the Paiba family, the palace was then owned by various noblemen and women over the years including the Count of Corbos and the Counts of Miraflores. In 1901 it was bought by Regla Manjón Mergelina (Countess of Lebrija), who restored and reconstructed the palace to house her valuable collection of antiquities. She had a passion for archaeology and decided to adorn the palace with artefacts found during her excavations, as well as those bought from other archaeologists, friends of the Countess. The palace is 2500m², over two floors – the ground floor used during the summer and the upper floor during winter. 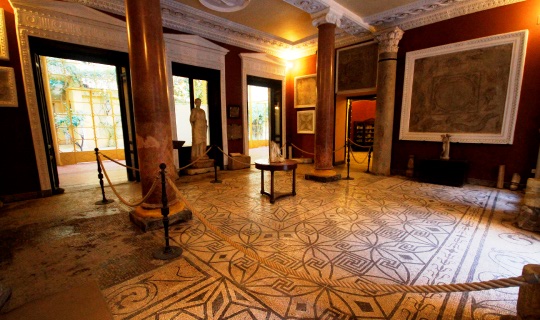 Some of the most significant pieces in the collection include the opus sectile paving made up of multi-coloured marbles, which paves the entrance hall, and the mosaic depicting God Pan, which can be found in the palace’s central courtyard and was previously displayed in another of the Countess’ properties in Olivar de los Palacios. The mosaic’s central medallion represents Pan, who is in love with Galatea and serenading her on his flute, while the other medallions show the love stories of Zeus and in the corners are representations of the fours seasons. The ground floor also is filled with Greco-Roman busts, mythological depictions in various forms, not forgetting pieces from the Arabic era, China and Persia, found in display cabinets and on the palace’s walls. Amongst other artworks, those of particular importance include original paintings by Van Dyke, Brueghel the Elder, the Murillo school. On the upper floor there is also a magnificent library containing over 6000 books and essays. 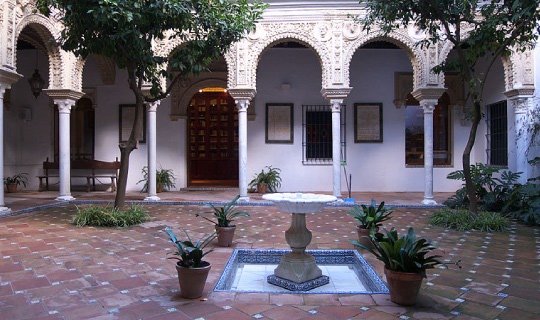 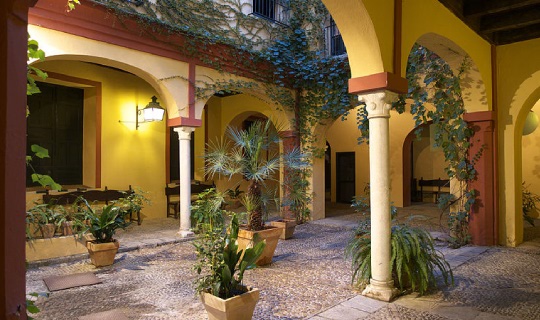 My name is Mercedes Míguez, and I am an official tour guide for Seville. I carry out all the guided tours described on this website, and any others you might require. Just ask me, and I'll organise it for you.

I conduct the tours in three languages, Spanish, English and German. I also organise tours for the blind and the wheelchair-bound. Schools, colleges, associations, organizations and all kinds of groups.

Sevilla Essentials Cathedral, Giralda, Alcázar and the Santa Cruz
neighbourhood
Palace Homes The Pilatos House, the Pinelo House and the Palace
of the Countess of Lebrija
Cycling Tour Tour of the 1929 and 1992 Exhibitions